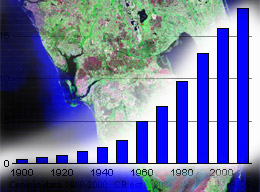 Florida continues to grow. According to the 2010 Census, Florida’s population was 18,801,310 on April 1, 2010, an increase of 2,818,486 since April 1, 2000.
The 2000-2010 period was the fourth consecutive decade to see the Florida population grow by more than 2.8 million residents. Florida’s numeric population increase during the past decade was the third largest of any state, trailing only Texas and California. Its percent increase (17.6 percent) was the eighth largest in the nation.
This is good news for Florida real estate market recovery too.
View complete article...
Find your next residence in SW Florida...
Share |
Posted by Dominick Tascher at 7:08 PM